Since I had to travel to Minneapolis for business meetings, I decided to stay a bit longer and drive over to the Upper Peninsula of Michigan to see Bond Falls. I’d wanted to see it since I saw it listed on CNN’s Top Ten Waterfalls in the US. I persuaded a colleague to join me, so the drive would be an adventure instead of just a long drive.
After the conference we spent the night at the same hotel, and set off early the next morning, headed towards Wassau, WI. The trip was supposed to take just over 5 hours. We were excited about hanging out together for another few days since we were BFF’s at work.
We stopped in Eau Claire to get breakfast. As we drove around the town, we ended up at The Nucleus which we found online. They had fantastic breakfasts! I ordered the blueberry pancake and my friend ordered the Lemon Ricotta Hotcakes. They said that she got the last of them, as they had just run out. Boy were they both yummy! After a quick bathroom break and stretching our legs, we got back in our rental car and drove on towards Wassau. 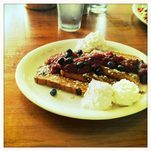 It was not an interesting highway to drive. It was pretty straight heading East until we came to Wassau, then we veered North. We passed a lot of small towns and even a prison and of course lots of land and lakes in the distance. Then when we were heading north we passed a lot of lakes on both sides of the car. Eventually, we reached Bond Falls.
We were surprised that we could park so close to the falls, so that when we got out of the car we could hear the roar of the water. After a brief walk down a boardwalk, we came to a viewing point and were amazed at the sheer size of the falls. Granted they are nothing like Waimoku Falls or the power of Niagara Falls, but we were still amazed. We watched the Ontonagon River fall 40 feet down to a pool below. The stream actually split into numerous waterfalls and divided into smaller cascades. As we walked up to the top of the falls, we were grateful to be out in nature by a scenic river and not in a stuffy office or car. 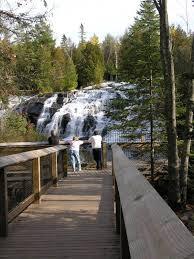 Approaching Bond Falls
We stayed the night at Dancing Eagles Resort in Watersmeet which was very nice and provided breakfast. The next morning we decided to drive back to Minneapolis by a different route. As we left Watersmeet heading south on the highway, we continued straight through Bond driving west towards Minneapolis. We had a quick stop for lunch and kept driving. We had dawdled at the Resort, not really wanting to head back to our families and work, enjoying our reprieve, but we had flights to catch back to Seattle. When we finally reached the car rental place to return the car, we were both tired but happy as well. We had a quick respite from our husbands and families, even if just for a long weekend. When our flight landed, my husband came to pick us up and I was happy to see him!

Start your trip to Haight, Michigan

Start your trip to Haight, Michigan