My husband and children were excited about our vacation to visit the Grand Canyon in Arizona and the surrounding areas. All I could think about was why are we visiting a desert (hot) instead of a gorgeous tropical island destination, but my husband had seen that you could walk on top of a glass lookout and see the valley and Colorado River below. And, another upside is we would get out of rainy Seattle.

When we left Seattle, we flew into Flagstaff Airport, picked up our rental car and drove north a few hours until we reached the South Rim of the Grand Canyon. We were all exhausted from traveling and grateful to have reservations at the Grand Canyon Village. Thank you Sandy at Walnut Grove Travel who is a godsend!
The next morning we took a tour out to the Grand Canyon Skywalk. It was a long drive time, but the scenery and tour guide were both phenomenal. When we reached the Skywalk and walked out on it, I was a little frightened when I looked down and saw the long drop to the river below. My husband and kids had a great time jumping up and down to see if it would break. Thankfully, it stood strong. The only downside is we weren’t allowed to take our cameras with us out on the Skywalk. So sadly, no Christmas photo for us. 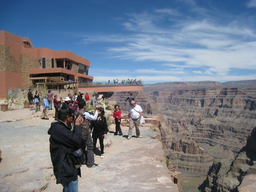 You can see the Skywalk in the distance 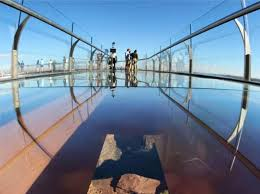 Don't look down if you're scared of heights!
As we explored the Grand Canyon South Rim area, we learned that the steep canyon was carved by the Colorado River and is contained within and managed by the Grand Canyon National Park, the Hualapai Tribal Nation, and the Havasupai Tribe. I never knew that President Theodore Roosevelt was a major proponent of preservation of the Grand Canyon area, and visited it on numerous occasions.
We also learned that for thousands of years, the area had been continuously inhabited by Native Americans who built settlements within the canyon and its many caves. The Pueblo people considered the Grand Canyon ("Ongtupqa" in Hopi language) a holy site and made pilgrimages to it. The first European known to have viewed the Grand Canyon was García López de Cárdenas from Spain, who arrived in 1540. 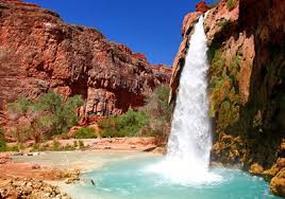 Our next stop was to visit the Havasupai Indian Reservation and Havasu Falls. I heard the year-round water temperatures in the river stay near a comfortable 70 degrees Fahrenheit. We stayed at the Supai Lodge on the Reservation near Hilltop. I had never met American Indians before and they were extremely hospitable. We went on a guided tour by horseback to visit the falls. Apparently Havasu Falls was named as one of the Top 10 Waterfalls to visit in the United States and is now more popular than ever, and we were not disappointed. Apparently Havasupai translates into English as "people of the blue-green waters.” 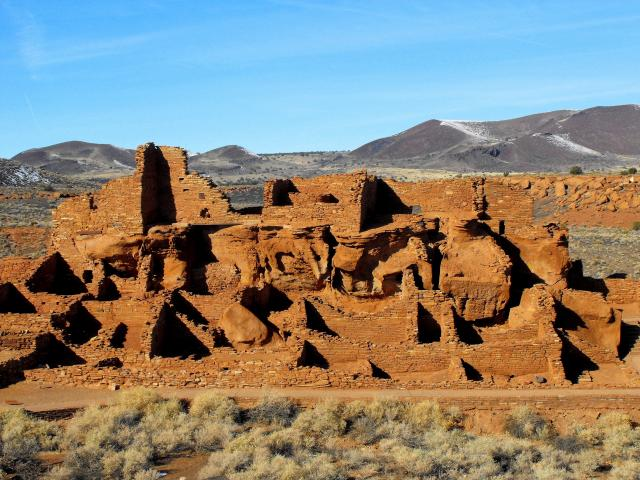 Wupatki National Park ancient pueblos
After spending another half day exploring the area, we drove back to Flagstaff. Our kids found a video on YouTube talking about the top five things to see in Flagstaff. We had already seen the top attraction, the Grand Canyon, so we decided to see the other four. We were all impressed by the huge Meteor Crater which was nearly a mile across, almost 2.5 miles around and deeper than the height of a 60-story building.
We also visited the Lowell Observatory, which is most famous for the 1930 discovery by Clyde Tombaugh of Pluto. Too bad it’s no longer a planet. There were a lot of science and discovery exhibitions so we all had a good time. We explored the Wupatki National Monument, which was simply breathtaking. I was amazed by the preserved Native American pueblos and that the walls and archways were still standing.
On our last day we drove to Sedona and spent some of the day at the Red Rock State Park. I saw the amazing graceful red arches and pillars that I’d seen in movies. Now I know they are real and not fake. After a while the kids and I grew restless and hot so we drove back into Sedona and found an air conditioned mall where we could sit and relax and eat ice cream.
The next day when we left Flagstaff, heading back to Seattle, we were again exhausted yet had a great time. With our business, family and hectic lives, we are very grateful to have Sandy at Walnut Grove Travel in our lives.

Start your trip to Mohave, Arizona

Start your trip to Mohave, Arizona