Driving Along in Our Automobile

As my girlfriend and I pulled out of her driveway in Seattle, we said goodbye to our guys and set out to see the world. Actually we just set out to drive to Western Oregon and Idaho because we wanted to visit friends and see Triple Falls in the Columbia River Gorge and the Shoshone Falls in Idaho. We’d gone skiing in Idaho before so we basically knew where we were going. We didn’t want to take either of our own cars so we rented a car that got good gas mileage and we were on our way

As we drove along the highway, we took turns driving and I drove first. Our first stop after leaving Seattle was Portland, Oregon, which was less than a six-hour drive. We enjoyed the scenery, which was breathtaking, and played car games. After three hours we found a rest-stop and pulled over for a break. Then my friend drove the rest of the way to Portland. I have friends in Portland whom we stayed with overnight. It was great to see the Robinson’s, as we’ve been exchanging holiday cards since we were younger. Her two sons are growing so fast!
The next morning they waved us off, and we were on our way! It was less than 200 miles to Columbia River Gorge National Scenic Area, and we were excited! Our intention was to set out early so we’d be there by lunch time, and then hike out to see Triple Falls. We had read that the Falls is 100-135 feet high and is actually three rivers that join together. When we drove along the interstate, we kept stopping to take photos and admire the many waterfalls we passed. At one point we parked and hiked along to see Bridal Veil Falls. Gorgeous! We also went to a lookout to see a beautiful view of Columbia River Gorge. Wow!
Eventually, we got to the trailhead and set out on our hike. We passed Horsetail Falls and continued on to Upper Horsetail Falls, which for some reason is called Ponytail Falls. As we watched the water plunge over 170 feet to the ground below, we both wanted to stand under it but knew that we would get pummeled by the massive amounts of water. 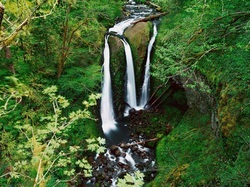 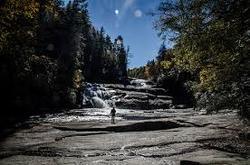 Triple Falls (as seen above in the top two photos)
That night we stayed in a charming hotel in Cascade Locks. We had to backtrack a little but we were glad we stayed the night. Next stop was Boise. We had a long drive ahead of us, so we set out early in the morning. Along the way the scenery was beautiful – tall verdant mountains, rivers, and not a lot of cars or traffic. We felt free and happy.

When we finally pulled into our hotel in Boise, we were exhausted. We decided to stay an extra night to recover. We wanted to see what Boise had to offer. We visited the Old Penitentiary, which was a historic site. Apparently it was built in 1970 of hand-cut sandstone and was used until 1973. As we walked around the rose gardens, cells and gallows, we both realized that we’re really glad we weren’t prisoners.
The next day we set out for our final destination on this adventure – Twin Falls, about a four hour drive away. Ever since my girlfriend saw an article about the top ten waterfalls in the US, she’s wanted to see these Falls. Apparently Triple Falls in Oregon and Twin Falls in Idaho were among them.
When we arrived in Twin Falls (the town), we continued on to see Twin Falls (the waterfalsl), Shoshone Falls Niagara of the West) and Perrine Coulee Falls and I can say that we were not disappointed! It was beautiful. When we arrived that evening at our hotel, we were pretty tired. It had only been five days but we’d done a lot of driving in that time. So the next day we were happy to just relax. We found a great little place to get massages which were the perfect thing! 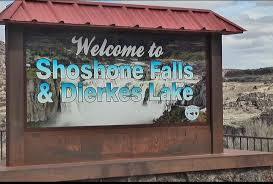 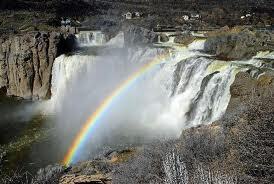 The beautiful Shoshone Falls, Niagara of the West
The next day we started the drive back to Seattle. We left early as it was over a 15 hour drive to Yakima, where we were staying with friends. By the time we got there it was already late in the evening, so we said our hellos and went to bed. It had been a long drive! The next morning we enjoyed catching up with our friends and their three kids. We set out for Seattle the in the afternoon and arrived a few hours later.
I’m grateful that my girlfriend and I had a great time, driving along in our automobile, seeing beautiful waterfalls, mountains, rivers and catching up with friends. Can’t wait for our next adventure! Thank you Walnut Grove Travel helping us rent the car and arrange for our hotels!